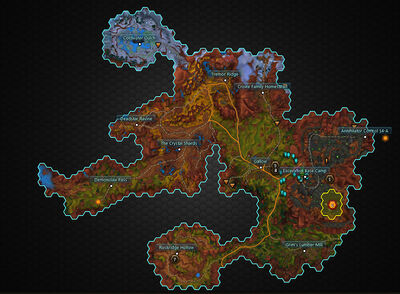 Algoroc is a nice place to warm up after all the time spent in the Northern Wilds. The temperate frontier region of Nexus settied by Exile pioneers. Not far from the Northern Wilds, the forests of Algoroc grow in distinctive red soil that gives the place its name ("Algoroc“ is ancient Cassian for "red rock"). These red cliffs are also rich in the mineral loftite, a potent source of energy for everything from generators to starships. The famed Loftite Cliffs of Algoroc - where the valuable blue crystal is so abundant that shards twice as big as a man float in the air, and smaller chunks can be plucked from the red stone that line the hills of the region. The Exiles of Algoroc dwell primarily in the small mining community of Tremor Ridge and the larger, more central town of Gallow - where the Exiles who settied the area signed the "Algoroc Accord" to act as a guiding document for locals.

For those brave galactic prospectors hoping to strike it rich, a visit to Tremor Ridge might be in order. Tremor Ridge is a small mining camp in the lawless wilderness of western Algoroc. Inhabited by rugged loftite prospectors and their families, Tremor Ridge has always been a dangerous place because of its location beyond the borderlands--and recently it was attacked by a cutthroat group of space pirates known as the Deadstar Marauders who are stealing loftite, taking slaves, and killing anyone who tries to get in their way. Accustomed to the dangers inherent in their trade, the folk of Tremor Ridge are hunkering down and getting ready for a fight.

East of the dangerous borderlands is the town of Gallow. With the recent explosion in the demand for loftite, the once sleepy Gallow has become a boomtown, its dusty streets full of hopeful prospectors, colorful hucksters, and shrewd merchants looking to make a buck. The recent boom has also attracted the Darkspur Cartel--an intergalactic crime organization that hopes to profit from Gallow's good fortune by extorting businessmen and running loftite prospectors off their rightful claims.

After the town's peacekeeper was brutally and publically murdered by Cartel thugs, the townsfolk of Gallow called in the infamous Judge Kain to get to the bottom of it. Known for his iron will and his quick trigger finger, Kain has recently arrived in Gallow to swing the hammer of justice and take the Cartel down.

In the Gallow Fields, players will meet Rancher Dungarten at 4192, -3871 with a quest named Too many Girrok. Other characters in the area around Gallow are:

Ruins of the Eldan

Like many places on Nexus, Algoroc is the location of ancient Eldan ruins--and the western mountains are no exception. Here the Exile Academy of Science has been excavating an ancient Eldan facility, an impressive testament to the technological advancement of the mysterious Eldan who disappeared from the planet long ago. This excavation has also uncovered a massive, top-secret relic never before encountered on Nexus--motivating the XAS scientists to try and access encrypted Eldan data archives located nearby.

Unfortunately, the XAS archaeologists triggered the site's security protocols--unleashing an army of Eldan security bots that poured out and began attacking the camp. Besieged by these brutally efficient killing machines, the scientists are trying desperately to survive while attempting to shut down the security systems. Algoroc is the kind of place where someone with quick steel and a strong backbone might find fortune and glory--if they can avoid getting killed in the process.[1]

Please click on each episode name to show all the quests linked to it.

And the game journal.