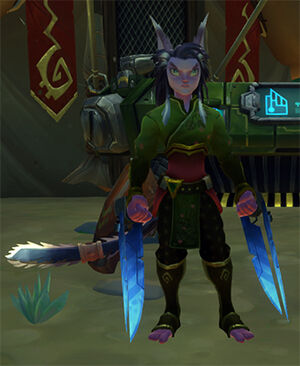 A consummate fighter and skilled user of the primal power sometimes called "magic," Arwick Redleaf is the First Consort to Queen Myala Everstar of the Aurin. He is deeply devoted to Queen Myala and is often seen by her side, concerned by her continued frailty. Since leaving Arboria his thoughts are consumed with anger and hatred for the Dominion. Though many Aurin have begun to call the forests of Nexus home, Arwick firmly believes that the Aurin should return to Arboria and will do whatever it takes to achieve that goal. Arwick is renowned for his fighting prowess and is considered one of the military leaders of the Aurin. Others often defer to him in the queen's absence - a rarity for an Aurin male.

Arwick is incredibly aggressive and military minded, pushing for violent action against the Dominion almost as much as Commander Durek Stonebreaker.

He holds an incredibly deep grudge against the Empire for destroying his home, and he lets nothing stop his rage.

Arwick Redleaf looks every inch the fierce Aurin warrior, with lean muscles, a stern expression, and the feline grace of someone who is always ready for a fight. He wears his bright hair long, with a single earring in one ear - a gift from the Queen as a token of her affections. His young, handsome face is graced, rather than marred by old battle scars, and he is a skilled swordsman that is often seen wearing a finely crafted blade.