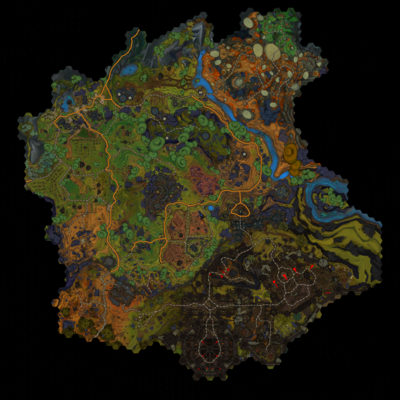 Auroria is a region located on the Olyssia continent of Nexus.

The imperial land grant known as Auroria is the breadbasket of the Dominion people on Nexus. The region's fertile lands and mild weather have made it a popular place for both lowborn and highborn citizens to put down permanent roots on the planet. Its major population center is the city of Hycrest in the northwest, where the Dominion's Governor Aluviel - a Luminai of House Azron - has his official residence. To the east sits the strategically important Fort Glory, while the heart of agriculture here remains the farmsteads of Gildgrass Province. Though the dangerous and mysterious Osun also occupy the southern corner of Auroria, the have so far kept mostly to themselves.

Many forms of agriculture can be found in Auroria, and the region's fertile soil can support a wide variety of crops. In addition to licensed Protostar farms and honey-gathering operations, the majority of foodstuffs are grown in the lowborn farmholds, which are usually family-run. Without the agricultural output of Auroria and the distribution center of Hycrest, feeding the many Dominion newcomers to Nexus would be very difficult.

The lowborn farmholds of Auroria are largely located in Gildgrass Province, the central breadbasket of the region, though a few are scattered throughout the area wherever fertile soil can be found. Famholds are generally run by a single lowborn family like the Casas or the Arvinas. Such lowborn families tend to be fairly well connected to their highborn patron families - and the employees are often those without such connections - but the famholds are still overseen by the lord of the province, who is invariably highborn.

Aluviel of House Azrion governs the Auroria region on behalf of his distant cousin, the emperor. Seen as a capable governor and well-liked by the many lowborn citizens who swell in the region, he has recently been faced with a new threat - the Voreth Osun to the south. Governor Aluviel is now doing all he can to help the Dominion's efforts to fight those giant creatures, primarily by coordinating with Fort Glory to bring talented freelancers to Auroria who can help deal with the situation.

The unusual Aurorian mineral called terrenite appears to be a form of naturally occurring metal with powerful primal bonding properties. Terrnite can atomically bond with almost any other metal, hardening the surface by sealing microscopic fractures and preventing cracks before they begin. The only drawback to using terrenite to reinforce armor and melee weapons is it's weight, which would make it too heavy for all but the strongest beings. As a way to reinforce a bastion or a city wall, however, it would be very useful.

Centrally located, Gildgrass Province is home to most of the farmsteads in Aurora, which are worked and sometimes managed by lowborn families - though of course a highborn lord oversees the entire province from Gildgrass Manor. The current highborn master of Gildgrass, Lord Syrus, is generally seen as friendly to the lowborn and mindful of the concerns of all Dominion citizens in the region.

Fort Glory is a Dominion military fort that is built into the formidable Aurorian Wall - a massive Dominion defense structure that separates Osun territory from the more civilized provinces of the empire. The fort houses some very powerful military hardware including attack ships, plasma cannons, and ultrabots. Currently, the storied Golden Legion is stationed at the Wall, and is ready to face-off against the Osun.