Long ago, the Cassians were chosen by the Eldan to establish the Dominion - and they're going to make sure the pathetic vermin infesting the galaxy don't forget it. Destiny is a terribly heavy burden, and the Cassians bear it with style. 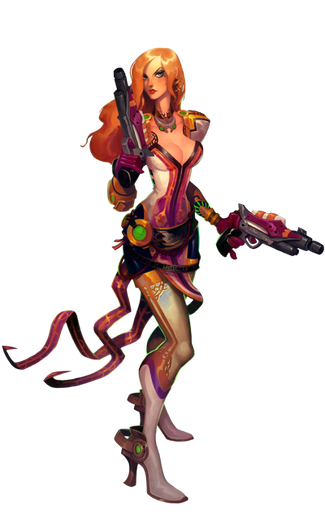 Gifted with ambition and intelligence, the humans of planet Cassus experienced a period of rapid technological advancement more than two thousand years ago, leading to the development of space flight and interstellar exploration. Such achievements caught the attention of the Eldan's mechanical servants the Mechari, who brought news of these remarkable beings back to planet Nexus.

At the behest of their masters, the Mechari journeyed to Cassus in a fleet of hyper-advanced starships. Standing before an awestruck assembly of planetary leaders, they demanded that the legendary Cassian Sword-maiden Tresayne Toria journey with them to Nexus - and in return, the Eldan would provide the Cassians a gift of immeasurable value. Refuse, they said, and the consequences would be dire. The valiant Tresayne agreed for the sake of her people, and she and her attendants were never seen again.

In time, the Cassians received their precious gift - an extraordinary human-Eldan hybrid known as Dominus the Half-Blood. Bearing gifts of powerful Eldan technology to the people of his mother’s homeworld, the message of Dominus was a simple one: swear loyalty to him, and together they would rule the greatest empire the galaxy had ever seen. The Cassians unanimously agreed, hailing Dominus as the emperor of the newly established Dominion.

At first, the humans of Cassus welcomed the arrival of Dominus and his Mechari entourage, entering into an unprecedented age of prosperity under his leadership, and that of his Luminai descendants. Through the Luminai and the Mechari, the Eldan guided political and military policies, forging the Dominion into a conquering empire that flourished for more than 700 years. It was then that the Eldan mysteriously vanished—leaving behind a final, cryptic message claiming they would soon seize the power of the gods.

Secure in the knowledge that the Eldan has ascended to godhood, Emperor Jarec issued the Vigilant Declaration, founding the Vigilant Church. This proved to be both his greatest triumph and gravest error, for the deification of the Eldan divided human society and ignited the Cassian Civil War. Ultimately, these dissident humans were forced into permanent exile, wandering the stars for centuries until the discovery of Nexus beyond the Fringe. Now this fabled planet promises the Cassians a true Eldan world to form the heart of their Dominion.[2]

Despite the Eldan's disappearance a the Cassian-led Dominion has steadily taken control of the galaxy through intimidation, political intrigue and a score of impressive military conquests. For the Cassians, the discovery of planet Nexus represents the fulfillment of an ancient destiny - and they will stop at nothing to ensure that the Dominion reigns supreme over the legendary Eldan planet.[3]

Cassians display typical human diversity in height, weight, and skin tone. Aside from distinctive clothing and armor styles, they are physically indistinguishable from their Exile kin. While less physically remarkable than some other sentient species (such as a Draken or Granok), Cassians have proven themselves to be cunning warriors and ingenious scientists with remarkable statesmanship skills. It is these very qualities that first brought them to the attention of the Eldan, whose intervention helped make them the dominant force in the galaxy.

Despite their Eldan ancestry, a Highborn Cassian's physiology is prototypically human. An individual with higher concentrations of Eldan blood may be taller, have a slighter build, more defined bone structure, and lighter body hair than one whose genetic profile is purely human. But while these highborn are often gifted with longer lifespans, they occasionally fall victim to mysterious and poorly understood genetic anomalies.

A typical Cassian life lasts around 100 years, with highborn citizens typically outliving their lowborn kin thanks to higher concentrations of Eldan genetic material. In rare cases, however, some highborn nobles who are very close descendants of the Luminai have been known to live for centuries.[2]

Cassus is a green, temperate core world at the the heart of the Dominion. Until recently, Cassus (specifically the capital city of Meridia) was the official seat of the Dominion, but the Luminai Emperor Myrcalus recently moved the Dominion capital to Nexus. Still, Cassus is home to more humans than any other world.

To date, no fossil evidence that humans evolved on that world has been discovered. The legends of Shade's Eve allude to the then-recent arrival of Cassians from somewhere else, but the planet of shared origin for the galaxy's humans remains unknown.

In keeping with Vigilant Church doctrine, Cassians believe the glory of the empire and the emperor's divine right to the legacy of the Eldan. While they are not fanatics, two thousand years of galactic expansion have forged them into a proud people, convinced of their own destiny to rule. Rather than conquerors, Cassians often view themselves as liberators, bringing social and religious enlightenment to less fortunate worlds—regardless of whether or not planets were interested in their "help."[2]

Cassians believe in themselves, their empire, and their destiny on Nexus as the true inheritors of the Eldan legacy. The planet's discovery and their subsequent journey there is a validation of those beliefs.[2]

NOTE: Only Dominion humans are called "Cassians." Those who left Cassus hundreds of years ago and now side with the Exiles are simply known as "humans."[2]

Cassians have first names inspired by the Eldan and the Luminai, with surnames that date back to old Cassian nobility. They are distinctly different from Exile names. Examples of Cassian names include:

(In real-world terms, most Cassians have Roman and Greek-inspired names (Portius, Aurelius, etc), though there are instances of modified English surnames that can mostly be seen in Lowborn families like Smythes and Trivvers.)[4]

Cassians have always been accomplished builders, and the Dominion architecture of their cities reflects their belief in the glory of the empire. They're heavily involved in many aspects of industrial production—including engineering, construction, and agriculture. Their inherent intelligence and insight make them quick learners and they specialize in many different fields.[2]

Cassians are the most devoted disciples of the Vigilant Church, and can be found in many different clerical and priestly vocations. They often serve as Inquisitors, church agents who tirelessly root out heretical ideas that undermine the authority of the emperor.[2]

Cassian communities are planned, orderly, and classically elegant. Large territories are generally ruled by a provincial governor—a title granted by one of the Great Houses of the Luminai. Smaller communities are ruled by prefects who report to the governor. Vigilant missions are common throughout the empire, and are generally ruled by a high priest of the church. In all Cassian communities, Imperial traditions are upheld and respect is always paid to the reigning emperor.[2]

Along with the Vigilant Declaration (which deified the Eldan and established the Vigilant Church), Emperor Jarec issued the Ancestral Decree, which declared that those descended from Dominus and his children rightfully constituted the ruling class of the Dominion, while those who lacked such heritage were destined to support them. As a result, many lowborn Cassians work as soldiers and laborers, while highborn Cassians are more likely to occupy positions of administration and military command. Highborn Cassians tend to live longer than their Lowborn counterpart; however, many of them are prone to genetic mutations that is related to Eldan and Luminai.[4]

Although the majority of Cassian population in the Dominion are lowborn, the highborn make up a large majority of their race on Nexus.[4] The in-game quests and NPCs treat your character with the respect due to the average highborn.

The most powerful Cassians are highborn, meaning they have a small amount of Eldan DNA in their bloodline dating back to Dominus the Half-Blooded, and can (in theory) trace their lineage back to one or more of his children. Highborn families align themselves with one of the Great Houses of the Luminai, and this grants them certain rights, honors, and privileges. Leaders of the families are usually the eldest and wisest members, as long life is a sign of "purer" Eldan blood in their veins. Highborn Cassians enjoy wealth and privilege far above that to which the average lowborn may aspire, ranging from VIP entrance at clubs to automatic promotions to officer rank when they join the military.

Many highborn families are strongly associated with certain subfactions of Dominion society, such as the military or the Vigilant Church. Many generations of the Aurelius family, for example, have been high-ranking officers within the Dominion Military.

The highborn tend to speak with a touch of formality and a continental flair (think "posh British"), favoring long forms to contractions. They respect the social hierarchy and have a tendency to condescend to those they perceive as beneath their station.[2]

Cassians without Eldan blood in their veins or the ability to trace their lineage to one of the Great Houses are considered lowborn. Lowborn Cassians are the working class on Cassus, and can generally be found as farmers, laborers, low-level merchants, and rank-and-file soldiers throughout the Dominion.

Despite the disparity of wealth and opportunities between lowborn and highborn, there are two significant paths for lowborn to increase their social stature: military service, and Vigilant Church service. Toric Antevian and Corrigan Doon are among the lowborn who have managed to achieve high social status and fame through success in their chosen fields.

Lowborn Cassian speech sounds similar to a working class British or cockney accent. They're usually direct and to the point, and any embellishments typically take the form of a quick curse or colloquialism.[2]

Many Exile humans descend from lowborn families, as their ancestors left the Dominion during Brightland's Rebellion.

A video explaining the Cassian race in Wildstar made by the Curse Gamepedia YouTube Channel.