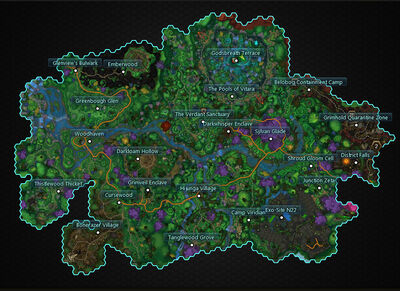 The Celestion Forest is one of the most lush and verdant locations on the surface of Nexus, and one that both the Aurin and the Mordesh have settled for different reasons. Aurin have embraced Celestion because it is so similar to their homeworld Arboria - including the presence of semi-sentient trees and a staggering variety of life forms. It is that same variety that's attracted the Mordesh, many of whom seek to experiment on and with the local flora and fauna in their never-ending search for a Contagion cure.

Not all life in Celestion is friendly, or native. Dangerous foes and dark secrets hide within the shadows of the forest. The Draken of the Dominion have also discovered the diversity of the forest and find it the perfect place for a great hunt, complete with Exile targets as a bonus. And rumors of mysterious warrior women in the forest may prove that the Torine Sisterhood is more than a myth.

The site of the first Aurin landing in Celestion, Glenview's Bulwark is adjacent to Greenbough Glen and is the first "safe zone" many visitors see. While not heavily settled itself, the Bulwark is a staging area for the settlement of the nearby glen and a fallback position should that area be overrun.

“
When we left Arboria - we didn't lose it, we only left for now - I swore we'd always be ready for something like the Planet Reapers. Nobody is going to catch us by surprise, or without a place to fall back to. That's what the Bulwark's about. It's a landing zone, and it's also insurance.

-- From Celestion: Basic Strategic Analysis by Arwick Readleaf, First Consort to the Queen

Greenbough Glen is the most recent area the Aurin and Mordesh have sought to permanently settle in Celestion Forest after establishing the village of Sylvan Glade. Protected by giants and their sacred hoogle totems (known as "voon"), the glen is also home to the semi-sentient Embertrees, ancient life forms probably relted to the venerable Elderoot of Everstar Grove. This region of the forest would appear to be ripe for settlement despite (and to some, because of) the dangerous predators that also dwell there, but such efforts have recently become unexpectedly difficult thanks to incursions by the Dominion. If Greenbough Glen is to be made safe for settlement, they will have to be driven back.

Aurin xenobotanists and Mordesh vita-alchemists agree that the semi-sentient Embertrees of Celestion represent either form of convergent evolution or a direct effort to create trees similar to the ancient Wise Ones of Arboria. Whatever their origins (and efforts are underway to uncover those origins), Embertrees have literally and figuratively embraced the Aurin settlers of Greenbough Glen and Woodhaven.

Embertrees are not particularly tall, but the grow strong and wide with enormous root structures that create hollows beneath the surface. Many Aurin have settled beneath the roots of the Embertrees, happy for the chance to resume their way of life. But in their eagerness to resume a normal Aurin life, some have forgotten there is a war going on - and cavernous holes in the ground could easily become deathtraps without a way to escape.

“
So I said that everybody's going to start living under these things at the very least let's set up some Weave Portals down there. That way people have a way to get out in case they're cornered do you think anyone listened?

I hope this doesn't turn out to be a big mistake. I should probably get that printed on a T-shirt actually.

Woodhaven is a small, protected clearing in Greenbough Glen that serves as a place of serenity and contemplation for the aurin, and is already taking on the appearance of a small village. The clearing is surrounded by a number of large and small hoogleish statues known as voon, believed to be representations of ancient forest spirits created by the giants. Woodhaven is often the first major stop for newcomers arriving on Nexus via Everstar Grove.

“
Many visitors, including First Consort Arwick Redleaf, believe Woodhaven should be much more heavily fortified. The aggressive Redleaf, in particular, believes that it would make a perfect staging ground for an attack against Dominion intruders. Recommend further observation of this individual. His passionate nature could make him a danger to our operations, or an asset - albeit an unpredictable one.

Strange, highly stylized totems called "voon" can be found all over Celestion Forest. Believed to be the ancient creations of the local giants - mighty creatures called Greenbough Guardians - they appear to be infused with a low level of primal life energy.l Some Aurin believe they are actually connected to the Weave itself, and that the guardians employ sensitivity to the Weave to come to the forest's aid when the totems are threatened. This would make the voon both a form of deeply spiritual art created by these mysterious creatures, and also a low-level magical alarm system for the forest.

This small region of Celestion has become infested with dark energies, likely summoned by the local Moodie necromancers. Malverines also stalk the forest around Cursewood, threatening to spread their foul diseases to the Exiles trying to make a home in the forest. More recently, a large Draken hunting expedition has established a camp here using the Moodies and Malverines as cover. They are believed to be taking some of their prey prisoner, releasing them at a later time for a more well-planned hunt.

The female Draken clanlord Razen the Preyfinder is part of the new generation of Draken women who do not care to follow the traditional gender roles of Draken society. Many begin as huntresses before seizing power for themselves, and Razen is no exception. When her former clanlord, a male named Bzuko refused to pursue a band of Aurin assassins because they were "strategically unimportant," she tracked down every last one of the little murderers and delivered their heads to Bzuko the next day. She then declared he was a coward before the entire clan, forcing him to fight her. The your female made short work of the aging clanlord, and won the loyalty of her bloodthirsty hunters that day.

The Preyfinder has recently been spotted in the Celestion Forest, seeking new prey for her latest hunt.

Scans show that the hoogle totems - known by some Aurin as "voon" - are suffused with residual energy bearing the distinctive primal signature of the local giants of Greenbough Glen. Alsthough the so-called Greenbough Guardians have never been witnessed creating hoogle totems, their innate connection to these totems is clear.

Scanbot calculates that the amount of residual energy within these totems dates their creation to several hundred years ago, at least. Scanbot is uncertain how long giants live, but it is possible that these totems were created by the very giants still dwelling within Greenbough Glen.

Scanbot is beginning to regret asking the question

Scans have collected sufficient data to begin translation of the Eldan symbols used to record the history of the Eldan nanotechnology found in Celestion. This translation is only the beginning however. It may be years or even decades before the data is fully understood.

PREDICTION: This translation matrix should also be of use to scholars working in other areas of xenoarchaeology, and may even shed light on long-underciphered Eldan sites found on other planets closer to the galactic core. If scanbot were able to take credit for individual discoveries, this one would probably earn scanbot a doctorate in Eldan translation matrices. Then User would be required to call scanbot DOCTOR Scanbot.

This phenomenon was named in the Celestion region, where the famed Godwood Tree imbues other life forms with primal life energy. Scans are hardly needed to detect this surge of raw primal power present in most native creatures, as it does register on the visual spectrum available to most biological organisms.

This Lopp settlement in Celestion is home to many treasure hunters who have braved the dangers of the deep forest in search of shinies. Though it is the central Lopp commerce hub in the region, the village itself has relatively few permanent residents. But Hi junga frequently sees a doubling or even tripling of its Lopp population whenever far-trader caravans stop by for a lucrative visit.

Please click on each episode name to show all the quests linked to them.