“
Think you're a PvE powerhouse? Then put your money where your mouth is and take on time-based challenges and earn awesome rewards. Speed kills... and so will you!

While out questing or exploring the world, the player may receive a 'Challenge which is an optional timed objective that can be completed for points. Challenges can be found in every zone as well as on housing plots and are unlocked by exploring and interacting with items around Nexus. Once a challenge has been unlocked it can be viewed and started from the Challenge Log. Once a challenge has been completed successfully, it goes on a 30 minute cooldown timer. The cooldown will only tick down while the player is active; should they log out, the cooldown will still be where it was before they went offline. If the challenge is failed, it can be restarted from the Challenge Log. Failures can be caused by the timer running out, leaving the challenge area, or manually ending the timer.

Challenges are divided into four types:

A General Challenge usually involves a feat of skill without combat, like reaching the top of a cliff in a set amount of time, traversing a booby trapped room without setting off a trap, or disabling mines without getting blown up.

An Item Challenge, as the name implies, involves collecting enough of a certain item. This could be out in the world, such as Snoglug eggs, or special drops from enemies.

An Ability Challenge grants the player a temporary ability, or "T-Spell." With this, they will have to perform a task with the ability, such as throwing rocks at a speedy adversary, capturing critters using a net-grenade, or handing out flyers to bystanders.

Quite possibly the simplest of all challenges, the Combat Challenge merely requires the player to kill a lot of a certain mob. These mobs will often have a white exclamation mark on the left of their nameplate, denoting them as a valid target. 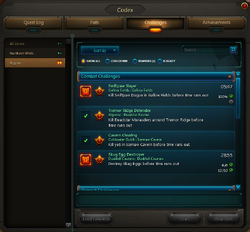 Should a player fail a challenge, wish to perform it once more, or to collect rewards they have yet to redeem, they can go to the Challenge tab of the Codex, accessed by pressing the "L" key. The log displays a summary of all the categories of challenges and the player's status for each, alongside the cooldown timer. Sections on the side allow the player to access each zone's challenges that have been unlocked.

Each level range of zones has its own Challenge Reward Track in the Challenge Log. Completing challenges in those zones earns points toward rewards. How fast or how many objectives are completed affects the number of points earned. Signature Players earn more points by completing challenges than free-to-play players. Once a track is finished, it can be restarted.