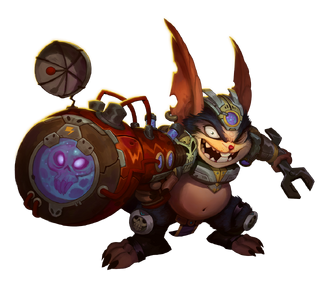 Nearly as brilliant as they are sociopathic, the Chua are mischievous inventors who develop advanced weapons and technology for the Dominion. Skilled technologists, highly intelligent, competitive, industrious, and gifted with inherent technological insight, the once-primitive Chua experienced extremely rapid industrial transformation of their civilization thanks to cultural intervention by the Mechari long ago. The Mechari believed the Chua would be a boon to the empire, and time proved them right. Science has never been more fun – or agonizing.[1]

Only recently "uplifted" from their semi-feral state, Chua still retain many vestiges of their rodent origins such as their furry pelts, sensory whiskers, and tails. Their resilience to injury is worth noting as it is normal for individuals to suffer horrendous, disfiguring wounds and go on as though nothing had happened. They also possess a shocking resistance to toxins (such as poison, radiation, and carcinogens), but it is unclear whether this is natural to their species, or inherited from their homeworld's polluted environment. Presumably this disregard to personal injury led to their particularly unsafe scientific methods.[2]

There is no visible difference between male and female Chua to a non-Chua observer, and according to an Ikthian science report, a genetic scan is required to determine gender.[3] In fact there are two acknowledged Chua genders, but only Chua can tell which is which, and they don't make any distinction in gender roles. Almost nothing is truly known about Chua reproduction, but there are many theories: they replicate through budding, or spores, or lay eggs. One popular theory posits Chua females give live birth to litters of 10 to 12 offspring, but don't nurse their young. This prompts ruthless competition among the litters for the limited resources each individual needs to thrive. Whatever it is, only the Chua know for sure.[2]

The Chua hail from Bezgelor - a small planet located in a binary star system. Bezgelor also has two nearly identically sized moons, Pergo and Pago, orbiting opposite sides of the planet.[2] As a result of the rapid technological development of the Chua, the once verdant and lush Bezgelor has become a barren wasteland, stripped of all its plant, animal, and mineral wealth.

In the course of scouting prospective races in the early years of the Dominion, Mechari observers found that the primitive but intelligent Chua of the forest world Bezgelor displayed considerable promise. In addition to showing an uncanny grasp of science and mechanical engineering, they were also remarkably devious and competitive. Predicting that a species unconstrained by economic or moral considerations could prove useful, they opened communications.

Hoping to hyper-accelerate their industrial development, the Mechari presented the Chua with several instructive examples of simple Dominion technology. The Chua reciprocated by presenting their celestial benefactors with a gift-wrapped Bezgelorian tar-beetle. As per its natural defense mechanisms, the beetle promptly exploded when handled by its new owners, covering all dignitaries present in corrosive black ooze that required months of corrective drilling and acid-baths to remove. The Chua howled with laughter over this for days on end.

Efforts to galvanize Chua's advancement exceeded even the Mechari’s most optimistic projections. Their zeal for industry instantly propelled them into a state of near psychotic overdrive, and in under a century the Chua had replaced most of Bezgelor’s verdant forests with factories that covered the planet's surface like a scab. The once blue skies now seethed with cancerous ochre, its formerly tranquil pastures reduced to dustbowls of ash.

Although initially too enraptured with their own productivity to see value in further discourse with the Mechari, by 538 AE the Chua joined the Dominion out of a need for base resources that their own ruined world was no longer capable of producing. For the last thousand years, they have created advanced weapons and technology for the empire. With the recent discovery of Nexus, the Chua look forward to exploiting the legendary planet's natural and technological resources, along with devising new and exciting ways to destroy their enemies.[4]

The Chua are a highly intelligent and technologically proficient race with a twisted sense of humor. The average Chua enjoys watching others suffer, and they are highly competitive with each other and everyone they meet. They often play cruel and violent pranks on others, including their allies, making them total sociopaths, though brilliant (if utterly callous) scientists.[3]

Chua are some of the most malicious, devious, and amoral creatures in the universe. Gifted with hyper-intelligence and a flair for technology and the sciences, Chua are arrogant down to their tufted tails, have a tendency towards god complexes, and get a kick out of playing cruel, violent jokes on others.[2]

Chua are extremely competitive, very willing to one-up their fellows in a variety of (often lethal) ways.[3] Chua have very, very, very little regard for life. Death and grievous injury are a fact of everyday life for them, happily accepted and doled out in equal amounts. The reasoning for this might be the Chua's rapid and large reproduction, their competitive nature, and the conditions of their homeworld of Bezgelor. With a never-ending supply of Chua to replace anyone who has died or been incapacitated, preservation is the last thing on their minds.[3]

The Chua view the empire as a means for their continued technological research and development—and therefore generally work hard to ensure its continued success. They see Nexus as a fantastical wonderland full of rare and exotic substances and ancient, powerful technologies—and cannot wait to get there.[2]

Chua speak in short, peppery declarative sentences and commonly omit the initial pronoun "I". They commonly praise themselves and their work, while insulting others for stupidity.[2] Their tendency for dropping unnecessary words and niceties is attributed to their brain moving too fast for silly things like grammar.[2]

Chua communities are called collectives. A traditional Chua collective typically contains roughly 30 to 40 adult Chua, and 20 or so apprentices known as minions. A Chua collective is a tight-knit community built around the achievement of common goals - mainly industrial pursuits and technological research. To continue their work and ensure the proper extension of their research, the Chua have developed a system of apprenticeship by which their young are assigned to prominent members of the collective for mentorship (and serve as free minion labor).

Most members of the collective are expected to participate in its defense - with the exception of the overseers and the inventors, who are considered too valuable to lose in battle and are often hidden away in the overseers' residence. When defending the collective, Chua usually use technological items and weaponry, depending more on their brains than their brawn.[3]

The Chua's ancestors worshipped the two Bezgelorian moons, Pergo and Pago—but modern day Chua are generally practicing members of the Vigilant Church.[2] That said, most Chua revere science over faith. The entire species has a great reverence for technology, research, and knowledge, which is why most of them work for the Royal Collegium or DRED. One of their most famous expressions, "Cozmotronic!" comes from the Cosmotron, a device the Mechari ambassadors had given the Chua's ancestors to teach them simple engineering principles.[3]

A video explaining the Chua race in Wildstar made by the Curse Gamepedia YouTube Channel.

For in-game lore entries see the The Chua entry in the Galactic Archives.