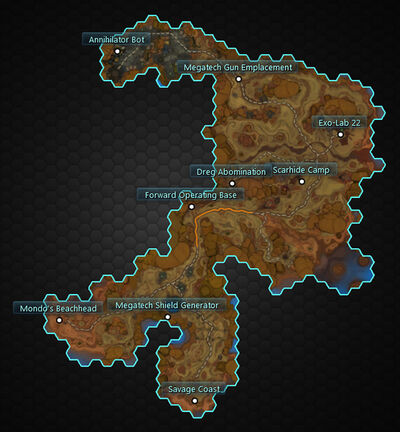 Located off the coast of Deradune, Crimson Isle has been neither explored nor colonized by the Dominion because of its remote location, rocky terrain and deadly wildlife. But recent long-range scans from the Arkship Destiny have revealed some tantalizing details that may soon require further investigation.

The southwest region of the island is a scattering of isolated, rocky beaches. Most of these are infested by the vicious scrab, a native organism known for its deadly sting and nasty disposition. Scrab make their nests just beneath the surface, and are infamous for bursting from the sand and attacking unsuspecting victims. In fact, the sheer abundance of these nests was the primary reason the Dominion's initial exploration team deemed the region uninhabitable.

Further inland, reconnaissance scans have discovered an unidentified settlement. Although clear visuals of the region are difficult to acquire due to frequent dust storms, imagery seems to show a ramshackle collection of primitively constructed dwellings inhabited by a group of unclassified humanoids. Bio-phase scans have revealed the existence of a number of mass graves, with skeletal remains displaying unnatural mutation. Collegium analysts have posited this mysterious group is indigenous to Nexus, but further data about them is currently unavailable.

In the northwest corner of the island, readings seem to indicate energy signatures that are consistent with Eldan technology, although it has been difficult to determine its exact nature. Unfortunately, recent attempts to scan this region at higher resolutions have been unsuccessful due to anomalous signal interference. In light of these strange new developments, the Dominion military plans the deployment of a covert strike team to investigate. Depending on what they discover, more direct and decisive action may be required.

A wild and lawless region on the fringes of the Dominion-controlled Deradune province, the Crimson Isle is red, rocky, and appears to conceal a significant amount of lost Eldan technology. The Dominion has recently sent an invasion force to secure the area, which has seen an uptick in Exile infiltrators and attacks by wild beasts. It is believed that a group of Exiles dubbed the Megatech Divisions are seeking to use ancient Eldan weapons systems against Dominion Targets.

The Savage Coast is the Dominion's chosen landing zone for the Crimson Isle invasion. It is more or less under sole Dominion control, but is still rife with aggressive local creatures. Pacification efforts are still underway.

“
Salvage Coast? Perfect! The Zax can make much use of Eldan tech on Salvage Coast. The Zax will devote all attention to securing the Salvage Coast for DRED! And, of course, the Emperor. Wait, "SAVAGE" Coast? Eh...whatever. Still probably Eldan tech there.

The Exile Academy of Science contains many subfactions dedicated to specific areas of scientific research. The so-called Megatech Division is a somewhat controversial XAS group devoted to the discovery and salvage of the Eldan's biggest and most powerful machines. They are particularly interested in the mighty Eldan Annihilator constructs found in areas like Crimson Isle and Algoroc.

“
Big is good. Bigger is better. Biggest is best.