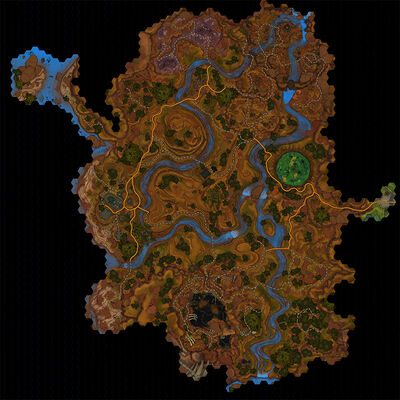 Deradune is a region of Nexus claimed by the Dominion and occupied by the Draken.

Inhabited by hostile natives and dangerous alien organisms, Deradune is a savage territory that has been claimed by the Dominion. With sweeping savannahs, rugged mountains, and exotic floating trees, Deradune is both beautiful and deadly - the perfect place for bold galactic adventurers seeking new challenges on planet Nexus.

Drawn to its untamed vistas and vicious wildlife, the ferocious Draken of the Bloodfire Clan have established a village on the eastern coast of Deradune. In order to test the mettle of his people, the battle-hardened Clanlord Makaza has called the Great Hunt - an ancient Draken tradition that culminates in the primal ritual known as the Bloodfeast. The Great Hunt is open to anyone who wishes to prove themselves to the clan, and adventurers from across Nexus have come to here to face off against some of the most dangerous creatures in the galaxy.

To offer an even greater challenge to his mightiest hunters, Clanlord Makaza has transported in wondrous and fearsome creatures from across Nexus, including the terrible cybernetic monstrosity known as Metal Maw. A deadly product of Eldan augmentation technology, Metal Maw is being held in a massive cage - but it is only a matter of time before the raging beast breaks free of its prison.

To the north of Bloodfire Village, the terrain gets more rugged and mountainous. Inhabiting the sheer cliffs that overlook the savannah is the Bloodtalon Brood of the barbaric Falkrin - a wild, winged race indigenous to planet Nexus. Having lived in Deradune for thousands of years, the aggressive Falkrin warriors are infuriated by the Dominion's encroachment on their territory, and a conflict between the two looms dangerously on the horizon.

At the southern end of Deradune there is a bubbling tar pit surrounded by the massive skeletal remains of long-dead creatures. Rumors have surfaced that an ancient Eldan exo-lab is located somewhere nearby, attracting a number of curious scientists and daring explorers who hope to find its location. Just above the tar pit are the sacred burial grounds of Clan Bloodfire, where the remains of fallen Draken warriors are interred. Normally these grounds are quiet, but lately guards have reported seeing strange figures creeping around the graves at night, whispering strange and ominous incantations…[1]