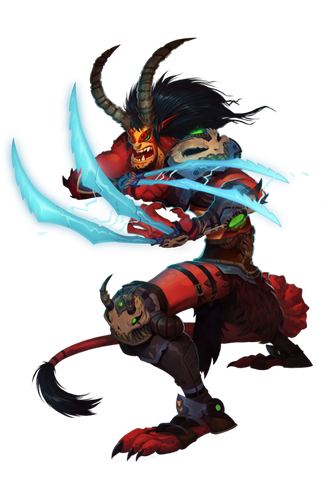 A brutal and aggressive species, the Draken are the most deadly fighters in the Dominion military. Sworn to serve the empire that bested their greatest warriors of old, they have dedicated themselves to conquering the planet Nexus for Emperor Myrcalus the Vindicator. They are a race of warriors and hunters, always seeking more powerful foes and more cunning prey to test their skills.[1]

Forged in the heat and dust of their savage homeworld, the Draken have come to Nexus to prove they are the most badass warriors in the galaxy. The Draken see Nexus as a primeval wilderness where they can test their strength and skill in combat. Sworn to serve the empire that bested their greatest Warriors of old, they have dedicated themselves to conquering the planet for the reigning emperor Myrcalus the Vindicator—and they look forward to defeating the battle-hardened Exile Free Companies in order to do so.[2] Eviscerations, disembowelments, and decapitations will definitely be involved.

Draken display both reptilian and mammalian characteristics. They are humanoid in shape, but have long tails that run roughly two-thirds the length of their bodies. Males walk with a hunched stance. Both males and females bear a pair of heavy horns atop their thick, bony skulls, and have sharp claws on both their hands and feet. Their tough hides range in color from red-brown to gray-black.

The mixed reptilian and mammalian attributes of the Draken present an evolutionary conundrum to modern scientists. There are more than one or two fringe researchers who insist that the race arose due to alien genetic manipulation in the far distant past. It seems more likely that their homeworld's abnormally harsh environment forced extreme adaptations for the species to survive.

Draken are warm blooded, and possess reptile-like claws, large cranial horns and thick, scaly skins. However many mammals such as the rhinocerous or mammodon exhibit similar adaptations. Draken usually give birth to litters of 4 to 6 hatchlings. Strangely, Draken young arrive encased with soft, egg-like membranes, but these are soon discarded. Thus, Draken might more accurately be thought of as mammals with a few reptilian traits.

Able to endure extremes of temperature that would fry of freeze most other species, the Draken's thick skin give them superior resistance to many forms of solar radiation. They breathe a gas mixture almost identical to Cassus, but with slightly more oxygen.[2]

Barring injury or accident, Draken can live to between 120 and 130 years. They reach maturity around 20 years of age.[2]

The Draken hail from Mikros, a small planet that circles a red giant star. Mikros has a tidally locked orbit, with one side perpetually exposed to the searing heat of the sun and the other side hidden in cold, icy darkness. Forged in the heat and dust of this savage homeworld, the Draken see Nexus as a primeval wilderness where they can test their strength and skill in combat.

Three centuries after the founding of the Dominion, the Mechari determined that the Dominion military required new blood. After examining thousands of known species and analyzing their combat effectiveness, they advised the reigning Luminai emperor, Azrion, to bring the Draken of planet Mikros into the Dominion. Unfortunately, the eternal respect and loyalty of these ferocious hunters could only be won through strength and violence.

The empire landed a formidable military force on Mikros in 344 AE, and the Draken hordes amassed for all-out war on the Dominion invaders. Acting upon counsel from the Mechari, the bold Luminai Emperor Azrion issued a challenge to the reigning High Clanlord Zhur: meet him in single combat, with the victor ruling supreme over planet Mikros. As the Mechari expected, Zhur accepted the challenge immediately.

Hours later, they met on the Field of Kazor, a massive gladiatorial arena in the ancient city of Red River. The duel was fierce and brutal, and the swords of the two combatants were soon stained with blood. In the end, the Luminai emperor's skill and training overcame Zhur's ferocity and strength. Upon the death of their leader, the Draken swore eternal loyalty to Azrion the Conqueror and his descendants – and these savage warriors have faithfully served the Dominion ever since.

For the Draken, the journey to Nexus represents the ultimate test. Not only is the fabled planet rumored to be the home of exotic, savage creatures that will test their skills in the hunt, but it is also the front lines of the intensifying war with the Exiles. The reigning emperor Myrcalus the Vindicator has claimed Nexus for the Dominion by right of the Eldan blood that runs in his veins, and the Draken have vowed to help him conquer the planet, regardless of the cost.[3]

When the Dominion started to colonize Nexus, the region of Deradune was given to the Draken. The Draken feel at home in the hot, dry savanna, hunting the native prey.

The central settlement in the region, Bloodfire Village, is ruled by Clanlord Makaza, himself an honored veteran of dozens of battles against the Exiles.

Draken males form the core of a Dominion military that allows them to embrace the animal within. Even when off the battlefield, they seethe with aggression. Nothing feels as natural to a Draken as being a soldier, and a Draken never feels at home except on the hunt or upon the battlefield, indulging in the killing urge.

Draken females are as bloodthirsty as their male counterparts, but where males resemble the Tasmanian Devil and destroy everything in reach, Draken women kill with elegant, ruthless style more like a death ballet. On average, Draken females are also far less impulsive than males. They're calculating and canny and known for toying with their prey.[2]

Draken male speech is loud, aggressive and gruff; females tend toward husky and commanding, but both are punctuated with low, feral growls. Their humor tends to be dry, with a tendency toward the violent and macabre.[2]

Most Draken first names tend to be two syllables or more and usually consist of a combination of hard consonant sounds and long vowels. Surnames usually are comprised of a descriptive nickname or honorary title.

Given the primitive nature of their society, the Draken never developed traditional, large scale industry. They are skilled weapon and armor crafters, but have no interest in high technology unless it is designed to kill.[2]

While the Draken are technically loyal citizens of the Dominion, it should be noted that they consider themselves culturally sworn to serve the Emperor, whomever that may be, rather than the Dominion itself.

Hunts of all kinds are overseen by the village huntress and her lesser huntresses, as they have been for thousands of years. Huntresses teach techniques that have proven most effective over countless generations, develop new killing styles for the strange prey of Nexus, and judge the abilities of those who hunt for the clan.[1]

Draken believe that by employing materials from the hunting ground itself into their hunt they honor their old gods, and scans indicate the Draken have created a wide variety of implements for their hunts on Nexus. Some of these have utilitarian purposes - essentially primitive clubs and blades that can be employed to kill and maim. Scans show more than 70% of these implements bear more than one type of genetic material, probably blood, from multiple victims. Others, while possessed of a deadly visage, appear to be purely ceremonial and only have mild traces of genetic material from the Draken creator.

Draken bloodshamans act as spiritual guides and holy men for both the clanlord and community at large, ensuring that the Blood Covenants are respected and followed by all. Bloodshamans are an integral part of preparations for war, chanting excerpts from the covenants as they engage in arcane rituals that are meant to prepare their warriors for battle.[1]

The Great Hunt is a Draken ritual somewhere between a recreational sport and a religious rite. Great Hunts are usually called by clanlords, officiated by huntresses, and blessed by bloodshamans with a great Bloodfeast. There are two levels of participation in the Great Hunt, one of which is open to almost any who will accept the challenge, and a higher level at which only the powerful may participate.

In the open challenge, Draken and their honored guests hunt wild game in the area and collect skulls for the sacred skullpiles. Members of the select, however, may hunt elite targets chosen by the clanlords and huntresses. Elite targets may be strange monstrosities from Nexus, imported beasts from all over the galaxy, or even especially cunning prisoners of war.

The five major Blood Covenants are the a central pillars of Draken society—including social structures within clans, religious beliefs and rituals, and a code of conduct and honor and during times of war. These guiding principles have remained remarkably unchanged over thousands of years.

Though loyal to the Dominion’s Vigilant Church, the names of the Draken’s old gods survive in the major covenants. Draken often swear an oath or prayer to the associated god when facing a great challenge.[4]

The Blood Covenants include:

The Covenant of Strength

The Covenant of Wisdom

The Covenant of Courage

The Covenant of Loyalty

The Covenant of Spirit

Common oaths related to these gods include:

Necroshaman and the Dark Rites

The Dark Rites are a set of controversial practices followed by a subset of the Draken population. They are what could charitably be described as an 'alternate interperetation' of the Blood Covenants, subverting the popular beliefs to facilitate black sorcery and dark blood magic. Practitioners of these dark rites are known as necroshamans, and can weaken and control others; the most powerful necroshamans can blur the line between life and death, summoning the dead to serve them.

Like most Draken, Necroshamans pray and swear oaths to the five gods, but are different in that they honor the 'hidden' faces of these gods, calling back to the hidden, cold face of Mikros itself. Necroshamans are hunted and reviled by the majority population of Draken, and knowledge of the Dark Rites is suppressed, except in the case of those who are tasked to hunt down and kill the necroshamans.

The Covenant of Weakness

The Covenant of Blindness

The Covenant of Fear

The Covenant of Treachery

The Covenant of Flesh

A video explaining the Draken race in Wildstar made by the Curse Gamepedia YouTube Channel.