Drusera's creation was performed through the means of the Protoplasmic Resonator, a device that took six distinct Eldan individuals (referred to as "vessels") as well as unfathomably precise amounts of each of the six primal elements, and merged them into a singular, incredibly powerful being.

The six vessels of choice were Progenitor Nazrek, Maker Zarkonis, Evoker Bathior, Weaver Aviel, Watcher Ionis, and Jariel, the Archon[1]. Incidentally, five of the six vessels are the best minds out of their order. Jariel seems to take the place of a potential candidate from the order of the Shapers.

Drusera was dubbed 'The Genesis Prime' by the Eldan, this name literally meaning the "final beginning", and she was the final goal of the Nexus Project. Drusera, unfortunately, is not the actual unique form of The Genesis Prime, and is instead one of two products created due to a voluntary fault[2] in the Protoplasmic Resonator - the device used to create The Genesis Prime. 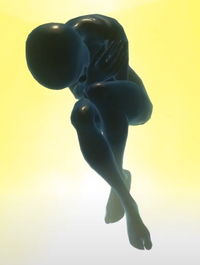 The actual body of the Genesis Prime

Drusera one of the two products of the Protoplasmic Resonator - the second being The Entity - and most accurately represents the target form of The Genesis Prime. Additionally, all Datacubes she records and interactions with the Eldan seem to refer to Drusera as if she were The Genesis Prime itself.

She takes on a ghostly appearance, is an overall pleasant and wholesome individual, and believes in everything being pure.