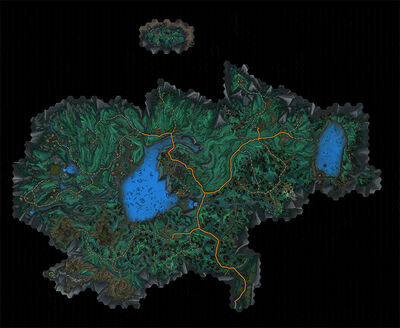 The borders of the Ellevar region are firmly under the control of the Dominion, even if Ellevar itself is not, by a long shot. Hoping to tame these wilds and keep the faith strong on the empire's new throne world, the Vigilant Church has established Lightreach Mission on the shores of Lake Larallen. The area is filled with small, scattered villages that someday could become thriving metropolises, but for now comprise settlers, ranchers, farmers, and other pioneers. Local residents include the Lopp of Glitterfur Village and a tribe of belligerent Pell who call themselves the Stormseekers.

Lightreach Mission is one of the most important Vigilant Church installations on Nexus. There the faithful worship the Eldan gods who granted them dominion over the galaxy, work to spread the faith to others, and help counsel the inevitable military leaders who defend them from the dangers of the Ellevar wilds. The Radiant Legion maintains a presence at Lightreach, and Commander Toric Antevian is often to be found there.

Is an outpost in the wilderness of Ellevar. Players can find there:

Quests and Tasks in Ellevar