This is the Galactic Archive entry for "Everstar Grove." If you wish to read the wiki's version, please click here. 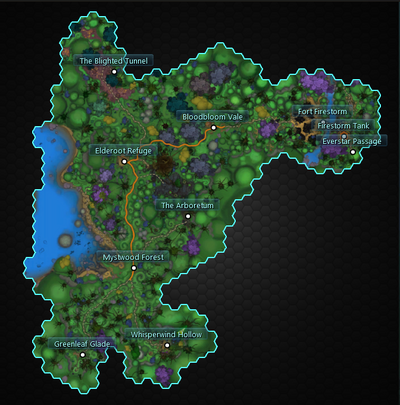 The lush, verdant forest area dubbed Everstar Grove has been named after the queen of the Aurin, Myala Everstar. It is the home of the mysterious and ancient sentient tree Elderoot, a being whose very existence has convinced many of the queen's people that Nexus can be their new home - a home they desperately need after the devastation of Arboria. In fact, Everstar Grove marks the first stop for many Aurin who have never visited the planet before. After so long without the reassuring presence of the Wise Trees of their homeworld, many Aurin find the grove both rejuvenating and life-affirming. Unfortunately, Everstar Grove has recently caught the attention of the Dominion Military, threatening the Aurin's safe haven and Elderoot's home.

Bramble traps are a type of carnivorous plant native to Everstar Grove and many other forested regions of Nexus. They have evolved - or perhaps been designed by the Eldan - to trap creatures as large as humans, killing their prey by simply holding them prisoner until they die of dehydration or starvation. They are difficult to escape from without assistance, but if the victim has outside aid escape can be accomplished without major damage to either the prisoner or the plant.

Scans of local thrasher ferns in Everstar Grove reveal that they possess a highly combustible form of sap as a defense mechanism. The chemical signature of the sap matches that of many plants in the heart of Elderoot Refuge, even those without the defense mechanism, indicating a biological relationship. It may also mean that all of the plants in Everstar Grove appear to have been designed with specific purposes by the Eldan.

Most modern fuels used by the Dominion and Exiles are stored in temperature-controlled barrels that prevent something as simple as termperature fluctuations from causing unexpected catastrophes. In an area bathed in diffuse primary energy such as Everstar Grove, a scientist's scanbot can trigger malfunctions in the simple machinery regulating fuel temperatures - often leading to static discharges, or worse, devastating explosions.