Exanite is one of the rarest substances in the entire universe. Consisting of equal parts of all the primal elements - air, earth, fire, water, life, and logic - pure Exanite is almost completely indestructible. The perfect balance of the primal elements in this rare ore also causes it to be almost weightless, making it a valuable substance for weapons and armor. Certain reports, including information from a Datacube made by Shaper Koral (see DATACUBE ENTRY: Dangerous Advancement), claim that the Osun are able to forge with Exanite, however most scholars agree that reliable methods of working with Exanite were lost with the Eldan themselves. In its purest form, Exanite is completely white, and its unique elemental properties give it a mysterious glow. Even a minuscule imbalance in the primal elements of the mineral gives it a vibrant color indicative of the more prominent element(s) within the gemstone. For instance, Exanite with a red-shifted hue indicates extra Primal Fire, Exanite with a lime green hue indicates Primal Logic, Exanite with a pale grey hue indicates Primal Air, and so on.

The physical properties of Exanite are varied and remarkable. In the later portions of Nexus's Third Phase, Exanite was extensively researched in response to the growing threat of the Strain. Multiple Datacube entries were recorded on the topic of the research, though one notable and quite important entry was recorded in and can be located in The Defile, named DATACUBE ENTRY: Repellent Frequencies. This Datacube goes over a key property of Exanite, which is its ability to repel and even cure disease -- A necessary attribute if the Eldan hoped to combat the Strain. This attribute did prove effective and Exanite does naturally destroy Strain sources, but unfortunately it was not enough to save the Eldan completely. Drusera made extensive use of Exanite to protect the body of The Genesis Prime from breaking free from Nexus (and by extension, letting The Entity get off of Nexus), trapping it in an unfathomably large tower of Exanite known as The Lightspire.

One common misconception with Exanite is related to its usage for the neural cores of the Mechari. The belief is that one can tell a Mechari's personality and aptitudes by the color of the Exanite showing within their head. This belief is false, however, as the variations of Primal Elements within the Exanite are so minuscule that there is no measurable effect on a Mechari's functionality. This conveniently serves as an excellent example for how specific the parameters for the creation of Exanite really are.

There is a Datacube entry on Exanite, recorded by Shaper Koral. This Datacube entry is located in Southern Grimvault, and is titled DATACUBE ENTRY: Sublime Substance. 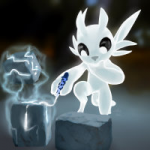