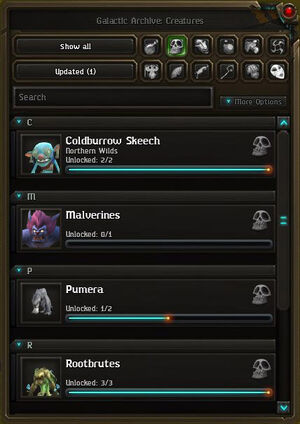 The Galactic Archives are an encyclopedic repository of lore that will describe the many creatures, people, places, and things players willl meet on the planet Nexus. While there are many ways to tell stories and reveal lore while players play the game, the Archives are where all of that information will be stored for their perusal.

While players are exploring the Archives, they'll also notice that many of the articles therein are connected to one another. An article about the Skeech, for example, will probably contain a specific link to the nasty Coldburrow Skeech tribe that lives in the Northern Wilds.

Entries are all organized into the following categories, which can be sorted via a series of buttons on top of the user interface. And since each entry can be classified into multiple categories, it's very easy to find exactly the kind of information that is needed.[1]

Any locations can be found in this section. This includes towns, zones, biomes, continents, and planets that are found in-game.

Subgroups of species based on culture, shared goals, affiliation, and associations.

If they can speak, the scholars of Nexus consider them sentient. This includes the nefarious and cannibalistic Skeech, or the necromantic Moodies.

Iconic characters within Wildstar that hold even the most minimal value to the story. Characters such as faction leaders, path experts, galactic enemies, oddballs, or anyone generally noteworthy can be found here.

If it's a beast - whether or not it was engineered by the diabolically brilliant Eldan Progenitors – it can be found here. This section mentions all the dangerous creatures of Nexus that may be trying to rip the player's face off.

This section covers the exotic flora found on planet Nexus. Often, that flora is carnivorous and mobile, like the strange Rootbrutes found in places like the Northern Wilds.

One of the big draws of Nexus for business-minded groups like the Protostar Corporation, are an untold wealth of rare and exotic mineral resources—such as the ‘enlightening’ blue crystal known as loftite found in the mountains of Algoroc.

This section describes things like bots, weapons, ships, and shuttles. Some very interesting crossover occurs between the Technology and Sentient Species category.

This category covers general information concerning the history of player races, world groups, and planet Nexus. For those who really want to immerse themselves in the game universe, this is the place to be.

Here players will find those to fight all gathered in one place. Read about their sordid histories, while at the same time learning about the best ways to defeat them in battle.

If they don't want a player dead, they'll be here. This section will include groups such as Protostar and the Freebots, as well as the races and iconic heroes of the faction.

The archives are unlocked by questing through zone, world, and regional stories, along with tasks. This is coupled along with collecting journals, TALES keys, and Datacubes.