These massive carnivorous primates are found nowhere else in the galaxy but the planet Nexus, and many scientists believe they mush have been created from animal and plant life energy by the Eldan. They may also have arisen naturally as plant-animal hybrids driven to defend concentrated areas of primal life energy. They can often be found near ancient Eldan machinery and facilities, seeming to protect these locations out of pure instinct. Giants derive their name from erroneous early reports that they were the creations of female sorcerers - even though it was later proven that they are a biological species and not creations of primal power, the name had stuck. Surprisingly for creatures of such size, giants are fond of burrowing and can dig through loose soil nearly as quickly as a canimid. They often slumber beneath the ground, hibernating as they wait for food to pass overhead. They then emerge in a furious explosion of violence and noise, slaughtering any prey that has not already died of fright. 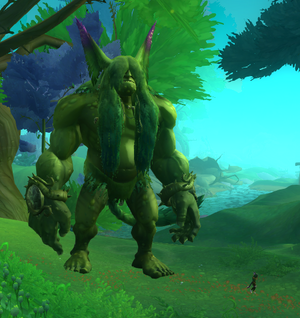 Greenbough Glen is home to a subspecies of giant called Greenbough Guardians, which possess some intelligence, as seen in the hoogle totems they carved long ago and which litter the area. It is widely believed the giants created these totems to protect the forest and call to them in times of danger. The Aurin have had some success in using these totems to bring the mighty giants to their side, though the Greenbough Guardians should be considered anything but predictable.

Many giants seem to possess a preternatural attachment to co9ncentrated areas of primal energy, usually life energy. They then protect such locations from harm. The Protectors of Whitevale and the Greenbough Guardians of Celetion are two examples of giants who seem content to attack no one as long as no one attacks them - or the areas they protect. Aurin mages have even learned how to call giants to protect the forest in times of trouble, though they do not directly communicate with the giant creatures.