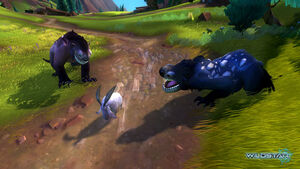 Girrok are large, ursine quadruped predators that live in the mountains, forests and rocky highlands of the planet Nexus. Known for their aggression and their voracious appetites, Girrok are solitary predators that make their homes in mountain caves or subterranean grottos. Though meat makes up the bulk of the girrok diet, the creatures are famously omnivorous. Thick limbed and heavily muscled, many species of Girrok also have hard, protective scales that grow on their backs and hindquarters, making them formidable foes for those who travel the untamed frontiers of Nexus. They tend to be solitary predators as adults, though younger girrok can sometimes be found in small groups of siblings or cousins. Settlements established near girrok hunting grounds often find garbage disposal units are knocked over in the middle of the night while small pets and children are generally kept indoors once the sun goes down. And every new arrival on Nexus has heard the famous tale of the Exile settler family who lost their newborn to one of the creatures one night - although authorities suspected the parents in the crime, the mother's insistence that "a girrok ate my baby" turned out to be completely accurate.

Girrok are surprisingly agile and intelligent, and employ a number of attacks that display an unexpected level of dexterity. Because of this, they are considered a valuable prize for intergalactic hunters.

SPECIAL ATTACK: Girroks are known to rip boulders from the ground with their paws and hurl them at their victims. If hit by these boulders, their victims are knocked to the ground and incapacitated.

ARCHIVE FUN FACT! The dexterity of the Girrok inspired one Nexus adventurer to try and capture one in order to teach it to dance. Not surprisingly, the dance lesson was short and unsuccessful.[1]

Many varieties of girrok can be found on Nexus, usually marked by small differences in the coloring of the coat or in body mass - two factors directiy related to their territory on the planet. Certain subspecies, however, are known for their — extreme ferocity or their specific diets.