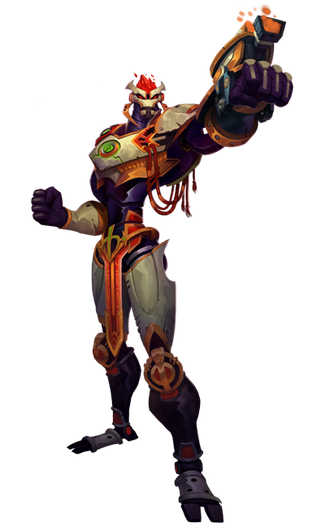 The Mechari are a race of sentient, mechanical beings created by the Eldan to serve and protect the Dominion. Highly-efficient killing machines that make it their business to eliminate traitors and spies on Nexus, they are not known for their keen sense of humor.[1][2] As the Eldan were the most advanced race in galactic history, the elegant complexity of the Mechari design makes them uniquely qualified to ensure the Dominion's continued success.[3]

Long ago, the Eldan on planet Nexus found themselves in need of a servant race that could communicate with the other races of the galaxy, and watch for developments in culture and technology that might be of interest to them. With this in mind, the Eldan created a race of sentient mechanical beings known as the Mechari.

These Mechari were sent out to observe the various inhabited planets in the galaxy, studying their individual strengths and weaknesses, and reporting the information back to Nexus. The Mechari always kept the intentions of their masters ambiguously vague - and indeed, the Mechari themselves were not aware of the true scope of the Eldan's machinations. As the centuries passed, the legend of the Eldan grew, and wild conjecture became well-worn tales about their origins, their technology, and the location of their secret homeworld.

During this time, the Mechari were instrumental in helping the humans of planet Cassus establish the Dominion, and presided over the coronation of the first Luminai emperor. Through a series of brilliantly executed maneuvers, the Mechari helped the Dominion to quickly expand, including bringing the Draken of planet Mikros and the Chua of Bezgelor into the fold. They also established the Imperial Corps of Intelligence (ICI) to protect the empire from spies and traitors, and took it upon themselves to oversee its operations.

In the wake of the Eldan's sudden disappearance, the Mechari were left with the responsibility of maintaining the empire without the Eldan's direct advisement. They shepherded the Dominion's evolution, participating in nearly every aspect of the empire's evolution in an attempt to ensure long-term stability. The Mechari also played a large part in the formation of the Vigilant Church, using their knowledge of the Eldan to establish both doctrine and hierarchy. As such, they are considered important members of Dominion society, both integral to it and apart from it.[4]

The discovery of Nexus was a momentous occasion for the Mechari, and they hoped to finally be reunited with their creators. But the Eldan were no longer there, their fate one of the galaxy's darkest and most enduring mysteries. Despite this disappointment, the Mechari continue their eternal vigil over the empire, ensuring its continued dominance on planet Nexus.[5]

Mechari bodies reflect elegant Eldan design. Each Mechari possesses a sentient soul-core of crystalline exanite—a priceless substance found only on Nexus—which contains a Mechari's life force and consciousness. Their bodies are detailed depending on their specific function and place of manufacture, though some Mechari have been known to change their appearance to make such distinctions less obvious.[4]

Technically speaking, Mechari bodies, as mechanical constructs, possess no physiology to speak of. Unlike other constructs, a Mechari's consciousness is contained within a soul-core of crystalline exanite. The soul-core, while inorganic, is perhaps the closest thing to a biological system that a Mechari possesses. Without this core, Mechari cannot function. Not only does it house their consciousness, but it allows them to experience physical sensations such as pain and pleasure.

Mechari bodies (or chassis) can be damaged and replaced as needed. As the soul-core is the only "living" part of their structure, mechari can survive decapitation, but will remain helpless as long as they are separated from their body. So long as they can avoid critical damage to their soul-cores, Mechari are more or less immortal. They can be physically deactivated, but are only truly killed when their soul-core crystal is destroyed.[4]

Like organics, Mechari develop unique personalities, memories, feelings, desires, and opinions. They are also able to learn new skills in addition to the initial training they receive in the Foundry. Mechari emotions and empathy are somewhat stunted at the time of their creation -- as they are forged fully-grown, without the growth periods afforded to organic beings -- which contributes to their reputation as a callous and brutal species. Much like other organic beings, they are known to dream during sleep, though the nature of these dreams is up for debate among non-Mechari.[4]

To ensure that Mechari would never have to worry about power generation, the Eldan designed them to consume food and drink like other organic beings. Technically, the Mechari are able to extract trace amounts of primal energy from the materials that they ingest—which in turn is used to fuel their mechanisms. A humorous side effect of this design is that Mechari can actually get drunk.[4]

Mechari speak in a deep, ominous and slightly mechanical tone. Their speech and intonation generally convey the sense that they are critically analyzing every situation, looking for weakness, vulnerability, or treachery.[4]

Despite the perfection of their design, they do require occasional repair and maintenance in order to ensure the highest level of performance. That being said, they do not age in the same frail manner as organics. There are a number of Mechari Millennials who have lived for more than two thousand years.[3]

Mechari soul-cores (or "head crystals") are made out of Exanite, a rare and powerful substance composed of all six primal energies. The unique properties of this material, along with Eldan engineering, give the Mechari their unique traits such as sentience and advanced intelligence. The exanite crystal contains millions upon millions of intricate layers, and no two layers are alike. The specific properties of this crystalline exanite are what make Mechari consciousness possible—the rare crystal embodies equal parts of the base elemental powers (air, earth, fire, and water) and the forces that bind them (life and logic). [4]

The color of the crystal is determined by the impurities of the crystal; pure Exanite--a perfect balance of all elements--is pure white, while even the slightest imbalance will drastically ruin the quality and change the colour. Orange, for example, would be a crystal that has a dominant ratio of primal fire. Contrary to popular belief, these imbalances do not affect the Mechari's personality, as the amounts are too minute to have any effect.

The soul-core can be as small as the slot on the back of their head, to more elaborate, grand designs.

Mechari bodies are made of a fascinating substance, having has much the same sheen and durability as metals like titanium, but with the ability to deform and stretch slightly to allow the Mechari speech and facial expressions.

Mechari tend to have extremely exaggerated body proportions, measurements deemed efficient and aesthetically pleasing (to other organics) by the Eldan. They have very long, elegant limbs, with the arms oftentimes bisected with a space in the middle, and joints little more than thin connecting pipes. Males have extremely broad, muscular chests, and usually stand up straight. Females have thin hour-glass figures with large "breasts," their assets highlighted by their posture of leaning slightly back, pushing the chest upwards and outwards. Both have absurdly thin waists.

All Mechari have robotic mandibles or other attachments on the sides of their face, which often twitch and move to assist with facial expressions. Mechari feet are distinctly made up of four parts: the heel, the foot, and two 'toes' likely designed for maintaining balance, with the females having a rear spike that makes them look like they're wearing high-heels. Armor models will wrap around their ankles but often leave the feet exposed; there are, however, some NPCs with their boots covering the entire foot.[3]

The Mechari are a brilliant race of mechanical beings created by the Eldan. Originally constructed to interface with other civilizations in the galaxy, the Mechari have instead become the brilliant architects of Dominion civilization, guiding it to success in the centuries since the Eldan's mysterious disappearance. Cold, cruel, and calculating, the Mechari work tirelessly to ensure the continued dominance of the Dominion by directing its intelligence-gathering operations—strategically eliminating the dissidents, spies and traitors who threaten to bring about its demise.[4]

Callous and uncompromising, Mechari are notorious for making brutal, bloodthirsty decisions without the slightest hint of regret or emotion. They critically analyze every situation, constantly searching for any threat to the empire—whether from without, or from within. When treachery is revealed, Mechari justice is swift and merciless.[4]

Mechari want nothing more than to ensure the eternal survival of the Dominion. Many Mechari also hope to one day be reunited with their Eldan creators. It is uncertain if these desires are hard-wired into the Mechari, or if they can somehow be broken. Regardless, there has never been a single instance of a Mechari betraying either the Eldan or the Dominion.[4]

There are two distinct classifications of Mechari: the first generation that directly served the Eldan—known as the Millennials—and the second generation of Mechari activated in the Foundry that orbits planet Cassus (all Mechari player characters are part of this second wave).[4]

Mechari first names have technological roots, while their surnames are derived from the specific fabrication section of the Foundry in which they were created[4] - typically designated by Roman numbers or Greek letters. They may also pair a single name with a title.

Mechari emerge from the Foundry with rudimentary emotions in place. Over time and depending upon individual experience, these emotions evolve in a number of unique ways. Given this variation of individual personalities, it isn’t unheard of for Mechari to develop deep attachments and relationships with others of their kind. Such relationships are often based on mutual trust, as well as the increased efficiency that teamwork provides.[6]

As citizens of the Dominion, Mechari are allowed to legally marry. Sexuality is unimportant since Mechari lack the drive to reproduce, so Mechari do not choose partners based on their assumed sexual dimorphism. What this means, in practical terms, is that a Mechari male is just as likely to form a bond with another Mechari male as he would a Mechari female.[6]

Mechari romance, if you can call it such, is much different than traditional biological courtship and love. While two Mechari may love one another, they are rarely affectionate in the way they treat one another. Mechari view marriage as a contract that allows specific legal benefits, as well as an obligation to support, protect, and care for their counterpart.[6]