This article is a stub. You can help WildStar Wiki by expanding it.

Captain Mordechai Redmoon is the vicious, bloodthirsty leader of the dreaded Redmoon Marauders. Though his career as an interstellar pirate started humbly enough, he has since become one of the most feared and reviled Marauders in the Fringe. Though part of Mordechai's success is surely due to his collusion with Laveka the Dark-Hearted, he is nonetheless a cunning and tenacious captain who demands the utmost loyalty from his crew.[1]

Captain: Mordechai Redmoon is referred to as "Captain" by members of his crew. He has also been referred to as "Dread Captain," a title he secretly relishes above all others.[1]

Mordechai is a tall humanoid alien possessing four arms and two legs. His long, multi-limbed torso means he towers well above most of his crew. His green skin is tattooed with Marauder motifs, and he covers his scarred face with a red and black leather mask. Mordechai's only remaining eye is a yellow cybernetic replacement, and his long grey hair falls freely across his broad shoulders. He dresses in a Marauder style all his own, and his clothes are replete with gold accoutrements.

Mordechai has never been the sharpest tool in the shed, so he traditionally relies on brute force to get what he wants in life. Since becoming captain of his own ship and crew, he has become ever more power-hungry and cruel. Due to his obsession with remaining in control, Mordechai is also suspicious and insecure, and he has a tendency to fly into rages based on any insult or slight, imagined or otherwise. His relationship with Laveka has revealed a devoted, almost gentle side of his personality, but he'll never admit that she's the one calling the shots.[1]

Before the name of Redmoon was bestowed upon him, Mordechai was just another Marauder looking for a strong captain and an eager crew. He raided and reaved aboard a number of Marauder ships throughout the Fringe, eventually gaining a reputation for his violent temper and merciless nature. In addition, Mordechai's origins as one of the Zorn—an obscure and primitive alien species hailing from a world deep within the Darkspur Nebula—set him apart visually from his shipmates.

Following an altercation with a Grund named Captain Boko, Mordechai staged a mutiny and took Boko's ship, the Lucky Kill, for his own. Renaming the vessel Redmoon Terror and christening it with his former captain's blood, Mordechai began a long string of vicious raids and attacks across the Fringe that eventually led him to Nexus. In time, his ship's name became so tied to his own that Dominion bounties began to refer to him as Mordechai Redmoon.

While counting his successes in the Halon Ring, Mordechai's crew captured a lone Draken female lost amidst the Ring's debris. Though Mordechai intended to intimidate the Draken and relieve her of any valuables she might have, she proved to be a much more interesting captive than he'd previously anticipated. Her name was Laveka, and she promised him power and wealth beyond measure if he would join with her on her quest.

Though Mordechai had sworn to serve no one following the death of Captain Boko, he felt irresistibly drawn to Laveka. And unfamiliar feeling began to seethe within his two hearts, and his infatuation with the Draken necroshaman only grew as their mutual plans became more intertwined. Soon they were bound for Skullcano Island, where Laveka anticipated the Mask of Mog-Mog to be hidden. With the mask, she swore, the Redmoon Marauders would be unstoppable.

Unfortunately for Mordechai, he met an unfortunate end defending Laveka while she claimed the Moodie mask for herself. Despite his alien durability, the burly Zorn proved to be all too mortal when confronted by enemies equal to his own skill and ability. What remained of Mordechai's corpse was collected by his crew, and Laveka has promised that he will someday return to lead them. In the meantime, the Redmoon reluctantly follow Laveka... but for how long?[1] 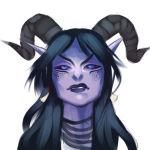