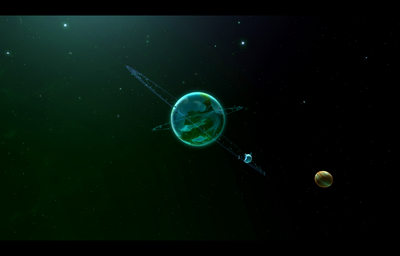 Nexus is the legendary planet of the Eldan--a powerful, technologically-advanced race that mysteriously disappeared from the galaxy more than a thousand years ago. Located in the unmapped regions of space, Nexus has been sought by archaeologists, adventurers and treasure hunters for centuries--and its recent discovery has ignited a mad rush across the galaxy to uncover its many secrets.

The Dominion, a powerful galactic empire, has claimed Nexus and all of its treasures, declaring war on the mercenaries, rebels and refugees called the Exiles, that discovered the planet and now call it their home. Caught in the middle of this intensifying conflict is a chaotic and vibrant mix of different races from the furthest corners of the galaxy, including hostile alien races, bloodthirsty space pirates, and greedy intergalactic corporations.

Nexus itself is wild and unsettled, with an endless variety of dangerous frontiers just waiting to be explored. Crumbling Eldan ruins lie hidden within majestic forests, towering mountains, and murky swamps, containing arcane magic and ancient technology of unimaginable power. The rusting wrecks of giant robots lie half-buried in shifting desert sands, and strange and deadly alien creatures prowl in the shadows of extraordinary monolithic machines. And hidden among all of these wonders are the dark secrets of the Eldan themselves, and the answers to why they disappeared from planet Nexus so long ago.[1]