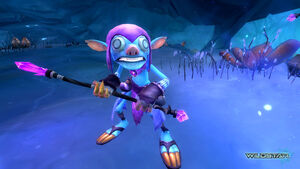 A species of bipedal, barely sentient humanoids, Skeech can be found wherever cave systems exist on Nexus. They are carnivorous and cannibalistic, with a primitive tribal social system and a simple shamanistic religion. Though they prefer to dwell underground, these dangerous creatures often emerge to hunt the areas surrounding their subterranean lairs. Different Skeech tribes often make war upon each other, with the losers usually serving as the main course at the winner's victory feast.

SPECIAL MAGICAL ATTACKS: Frost Lords, Diviners, and Shamans are powerful Skeech magic users. Their attacks include elemental projectiles that freeze their victims in place, as well as painful ice shards that erupt from the ground beneath them.

SPECIAL MELEE ATTACKS: Scratchers are low-level Skeech warriors that use their long, sharp claws to ravage their victims. Often these attacks are delivered in a vicious frenzy that is difficult to defend.

ARCHIVE FUN FACT! Despite their primitive nature, the Skeech are accomplished cooks. While being prepared to be eaten, more than a few of their victims have noted the Skeech's skill when using herbs and spices.[1]

Though originally thought to be led by tribal chieftains, recent findings indicate that Skeech females - which outmass males — by a considerable margin - are the true source of power and leadership in the tribe. These so-called "Skeech Queens" are often powerful shamans in their own right; and should not be underestimated.

Though possessed of enough rudimentary spoken language to be considered sentient all recorded effort at diplomatic contact by either the Dominion or the Exiles have ended in violence. While most of the simple Skeech language consist of regionally variable pronunciation of the word "Skeech," making translation exceedingly difficult - even Skeech tribes have difficulty communicating with each other.

The savage Coldburrow Skeech tribe inhabit the cave system of the same name in the icy Northern Wilds of Nexus. They are an especially vicious sect of this dangerous bipedal humanoid species, and have been known to capture unwary sentients to throw into their huge subterranean cooking pots, which also heat their underground homes. The Coldburrow tribe seems especially fond of dining on humans in particular, but when hungry - which is almost always - they will also consume Aurin, Chua, and Draken. They will attack non-organic or partially cybernetic species such as the Granok, Mechari, and Mordesh, but in general do not eat them.

And the game journal.