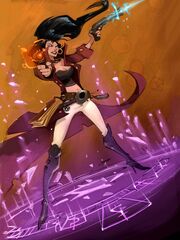 Spellslingers are deadly and dangerous pistoleers, often found beyond the Fringe working as bounty hunters, bodyguards, and guns-for-hire.

Spellslingers fight with a unique style that's a lethal combination of magic, reflexes and instinct - making them some of the most feared combatants in the galaxy. By wielding specially designed mag pistols, Spellslingers manipulate arcane energy to create powerful magic sigils – greatly increasing their accuracy and infusing their projectiles with destructive power.

Along with their deadly weapons, Spellslingers also use acrobatic agility to quickly move around the battlefield - positioning themselves to inflict the most damage upon their enemies. These deadly abilities, coupled with steely-eyed resolve, make the Spellslinger a truly frightening foe in battle.

All Spellslingers have a primal form of energy called Spell Power they can draw on to power up their abilities. Toggle Spell Surge to use it by pressing ("R"), and don't be shy about it! This resource regenerates over time.

A video explaining the Spellslinger class in Wildstar made by the Curse Gamepedia YouTube Channel.