Stonegut is a prime rare boulderback found in two locations in Malgrave. Once he enters combat, it takes him quite some time before he can dig himself out of the ground. During this time Stonegut is fully attackable and won't cast any abilities or attack players. He casts instant telegraphs which are easy to avoid by moving in a circle around him. 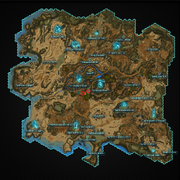 Killing Stonegut is part of the I Like it Rare: Malgrave achievement.