Tales from Beyond the Fringe: A Test of Loyalty 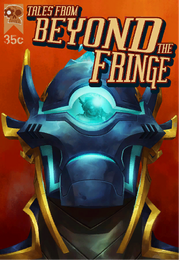 Tales from Beyond the Fringe: A Test of Loyalty cover art

In the wake of the discovery of Nexus, the Dominion spymaster Axis Pheydra of the Imperial Corps of Intelligence found herself in need of an operative to serve as her eyes and ears in the field. Wary of treachery from within, Pheydra decided to create her own Mechari super-agent. She called this project the Lethality Efficiency eXperiment and named her lethal creation "Lex."

Under Pheydra's watchful eye, Lex trained rigorously in the arts of reconnaissance, assassination, tactical deployment, and espionage. Om the day he was to complete his training, Axis Pheydra called Lex into her quarters.

"You have exceeded my expectations, Lex. You have demonstrated superiority in every aspect of your training - a testament to your creator's brilliance."

"As that was you, I feel obligated to agree."

"Your intelligence continues to impress me as well. For your final test, I want you to undertake a very special assassination."

"I look forward to the challenge. Who is the target?"

For a moment, Let thought his audio receptors had malfunctioned. Assassinate the emperor? The emperor was one of the Luminai, descended from the Eldan themselves! But agents of the ICI did not question orders. If Axis Pheydra desired the death of Emperor Myrcalus, he would deliver.

That very night, Lex infiltrated the emperor's palace. Overcoming the ferocious and bloodthirsty Draken throneguards would draw too much attention, so stealth, misdirection, and tactical eliminatrion would have to serve instead.

After swiftly mapping the area and studying the patrol patterns of the guards, Lex deployed disorientation generators in strategic locations. Blinded and confused, the Draken guards slashed wildly at one another, allowing Lex to slip past the patrols and into the emperor's private chambers.

His target stood unsuspecting in the center of the room, seemingly unaware of his approaching death. Without hesitation, Lex unsheathed his neurotoxin blades and leapt at Emperor Myrcalus. But just as the Mechari agent brought his weapon down for the killing blow, the emperor moved with inhuman speed, catching his arm just before the strike found its mark.

"You have done well," she said. "Welcome to the ICI." With casual grace, she handed him an unmarked grey wafer.

"A hologuise unit," he said, examining it briefly.

"Indeed," she said. "You will need it. There are additional targets that... requite your attention."

Lex listened carefully as she named them one by one. The list, he noted, was extensive.

This issue is unlocked by interacting with 7 datapads in Deradune and can be viewed in the Zone Lore datachron.