Tales from Beyond the Fringe: Artemis Zin and the Fiery Mountains of Mikros 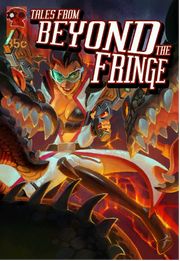 Tales from Beyond the Fringe: Artemis Zin and the Fiery Mountains of Mikros cover art

The perpetual inferno of Mount Crucible glowed angrily against the night sky, framed by roiling black clouds laced with lightning. The ground shook violently, as burning rocks and lava fell from the sky. There were few places in the entire galaxy more dangerous than where they now stood.

And on top of it all, Artemis Zin was having difficulty doing her make-up.

Kevo, her stoic man-at-arms, lifelong teacher, and steadfast companion, summed up the situation with his usual understated panache.

"Go if you must, Kevo. But I am not leaving with my face looking like this."

Kevo growled, setting his jaw. She knew the aged Draken wwarrior would never leave her side.

Despite the vehement warnings of friends, family, and concerned diplomats, artemis had decided to scale Mount Crucible on planet Mikros with nothing more than Kevo, two cambots, and her own sense of impeccable style. She was now broadcasting the event live, and her already astronomical viewership had skyrocketed.

The ground shook again, and the mountain belched fire. A deadly gout of molten lava descended upon them from above.

"I suppose that will have to do," she said, with a final glance in the mirror. And then they both ran for their lives.

They traversed up a ridge of volcanic rock that zig-zagged toward the precipice. The cambots hovered around them, skillfully framing the best shots. Often, they would zoom in on Artemis' face, capturing her grim determination just before she broke into the sly smile that had garnered her incomprehensible fame and fortune.

Progress was slow, but eventually they came to a rest on a large outcropping near the lip of the volcano. Suddenly, an unholy shriek sounded from above, and moments later, a scaly, winged abomination landed on the ground in front of them. It was a deadly two-headed Zogwyrm. And it was hungry.

"Well," Artemis sighed, "if we live, it will be fantastic for ratings."

Kevo sprang into action, his blade unsheathed, cleanly lipping off one of the beast's heads with a flawless strike. Screaming in pain, the beast lashed out with its tail and sent Kevo sprawling. Artemis jumped in between them, firing pistols at the creature's remaining head. This time, the beast was ready, dodging with lightning-quick reflexes and knocking Artemis to the ground. Jaws slathering, it moved in for the kill. Without warning, the outcropping broke away, shaken loose by the mountain's violent eruptions. The Felwyrm screamed and plummeted below. Artemis would have done the same, but Kevo, clinging to the mountainside, reached out at the last moment and caught her hand.

They climbed to the precipice. The heat was almost unbearable, but together they looked down into the fiery maw of Mount Crucible.

After a few moments, she collected her cambots and looked at the footage. Kevo stood grimly at her side.

"Oh, bother," she said, smiling. "One of them malfunctioned. We're going to have to do it all again."

This issue is unlocked by interacting with 8 datapads in Deradune and can be viewed in the Zone Lore datachron.