Tales from Beyond the Fringe: Rise of the Vindicator 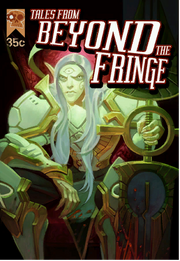 Tales from Beyond the Fringe: Rise of the Vindicator cover art

Dark clouds blanketed the skies, and rain fell quietly from the heavens. The funeral procession of Jarec the Vigilant, thousands strong, made its way slowly through the streets. All of Cassus mourned the passing of its great leader. Walking alongside the elevated coffin of his cousin, a young Luminai noble named Myrcalus seethed with rage.

Jarec of House Azrion ascended the throne after the tumultuous reign of Tyrani the Mad. Fearless and devout, he founded the Vigilant Church and restored his people's faith in the empire. But death came for Jarec too soon. He died in his sleep, the victim of a subtle poison.

Jarec was childless, and Vorios of House Chaul was next in succession to the throne. Although many believed that Vorios was responsible for Jarec's death, there was no direct proof of wrongdoing. Within days, he wore the emperor's crown.

The empire was once again thrown into chaos. Assassinations were common among the Seven Houses, and a lack of economic development quickly drained the empire's treasury. There was unrest amongst lowborn and highborn alike, threatening to plunge the Dominion into another civil war.

Standing before Jarec's tomb, Myrcalus of House Azrion swore to avenge his fallen emperor. Secretly aided by Axis Pheydra of the ICI, Myrcalus relentlessly followed a fading trail of witnesses and conspirators, until finally forcing a confession from the assassin who had delivered the poison to Vorios himself.

Strengthened by a terrible resolve, Myrcalus stormed from his family house to the emperor's palace. In his hand was Indominar, the sword once wielded by Azrion the Conqueror himself. As he approached the massive doors of the throne room, Myrcalus was stopped by the Draken throneguard stationed in front of them.

"Draken brethren," Myrcalus said, "I come to vindicate Jarec the Vigilant, whom I know you loved and served faithfully. Let me pass, and I will deliver us from this time of darkness."

The captain was silent, studying the young Luminai and the legendary blade in his hand. With an almost inaudible grunt, the captain ordered the throneguard into formation behind Myrcalus.

Myrcalus threw open the doors and saw Vorios perched upon the throne. Realizing the intent of the young Luminai, a trio of guards loyal to House Chaul rushed to stop him - but Myrcalus skillfully slew them all with the ancient blade of House Azrion.

Surrounded by the corpses of his enemies, Myrcalus stalked up the dais to the throne. Vorios cringed and trembled as Myrcalus approached, his wide eyes locked on blood-stained Indominar. He slunk to the floor, taking the crown off his head and offering it up to Myrcalus.

"For once, you speak the truth," answered Myrcalus. He cleaved the murderer in two.

Within hours, citizens of the Dominion were rejoicing in the streets, hailing their new emperor. In Myrcalus, the people saw the strength and honor of Dominus himself - and many began to say that he was truly the Half-Blood reborn.

This issue is unlocked by interacting with 8 datapads in Auroria and can be viewed in the Zone Lore datachron.