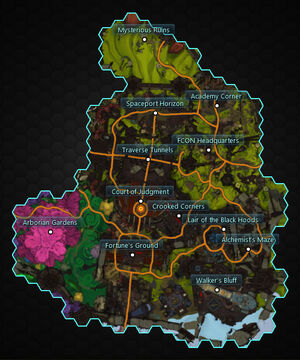 The capital city of the Exiles, Thayd accurately represents the people who inhabit it: a mix of wildly different ideologies and cultures all thrown together, forced to use whatever they could find and cram it in whatever space they can get--in this case, the ruins of an ancient Osun city.

Though the history of Thayd has not been fully explored by the Exiles, archaeologists from the XAS have pieced together a few tidbits. For one, Thayd was one of the most populous Osun settlements on Nexus. It appears as if the Osun rebelled against the Eldan at some point, and Thayd was laid to ruin in the ensuing conflict. The Osun citizens either fled the wrath of the Eldan or died defending the city.

As to the name, the story goes that Dorian Walker discovered the ruins shortly after arriving on Nexus. During his survey of the city's remains, he discovered a datacube that identified the city as "Kel Thayud." When he reported to the Exiles and named several possible locations for their future capital city, he mispronounced the city's name as "Kel Thayd." Eventually the name was shortened to "Thayd," and the rest is history.[1]

The Academy Corner is the center of Exile Academy of Science (XAS) activity in Thayd. Aside from the researchers bustling about, and the ever-present hologram of the Focus of Air, things that might be of interest to you include:

A planetside headquarters for the Free Companies of Nexus (FCON), this area is filled with training dummies, shooting ranges, and tanks and military equipment on stand-by. Amenities include:

Lair of the Black Hoods

The base for the (public) operations of the Black Hoods in Alizar. Aside from the cells in the center where interrogators question prisoners, amenities include:

Deep in this labyrinth of collapsed ruins, you will find the Alchemist's Guild going about their business. Best not to ask what it is, exactly. Non-guild persons might find themselves wandering these paths if they are looking for Victor Lazarin, and his daughter, Lucy Lazarin.

Said to be where Dorian Walker first made planetfall, up a very long walk up some ramps near Alchemist's Maze, you will find the final resting place of the Blue Horizon, now a hands-on museum where you can ooh and aah at the wondrous artifacts of Nexus.