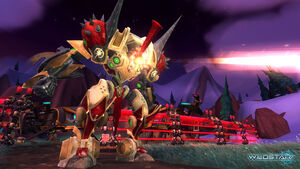 The war machine officially designated as the Ultrabot is a relatively new combat model designed for the Dominion military. Engineered for deployment in a variety of combat situations, the Ultrabot is a formidable piece of technology, sporting a heavily armored combat chassis and an intelligent strategic neural core that allows it to act independently on the field of battle.

Beyond its obvious defensive capabilities, the Ultrabot has been outfitted with the most advanced weapons systems the Dominion military has to offer. Housed within its chest cavity is an array of explosive smart missiles, and newer models have been modified with powerful DeathRay™ technology. Their usefulness in combat situations on Nexus has been proven many times over, forcing the Exiles to rethink their strategies during battles in which they are deployed.

SPECIAL ATTACKS: When attacking, Ultrabots deploy multiple smart missiles to throw their victims off balance, followed by a powerful blast from their DeathRay™ to finish the job.

ARCHIVE FUN FACT! When not in combat, Ultrabots are known to enjoy a nice, relaxing oil bath.[1]