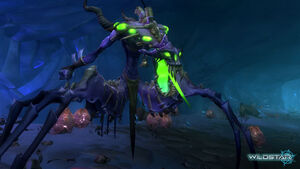 Xenobite Queens are a unique organism found only on planet Nexus. Standing nearly ten meters high on three insectoid legs, their bodies are heavily armored with horns, spikes, and a bony exoskeleton - allowing them to absorb considerable damage when attacked. Queens are most often found in deep caves, where they lay their eggs and protect them from predators and intruders.

These terrifying creatures are extremely aggressive, especially when protecting their young, and can spew venomous poison several meters. Though they rarely emerge from their lairs, they are known to send out hordes of their offspring to bring them prey. Their unfortunate victims are then incapacitated and strung up for the queen to dine on as she sees fit.

Interestingly, there have been a number of recorded instances where Skeech tribes have developed symbiotic relationships with Xenobite Queens, gathering their food and watching over their unborn young. The scientific reasons behind this dynamic are yet unknown, but galactic scientists have posited that Xenobite Queens have primitive telepathic abilities that allow them to control lesser sentient beings.

SPECIAL ATTACKS: Xenobite Queens can blast enemies from a substantial distance with her venomous poison. Their offspring appear immune to the substance.

ARCHIVE FUN FACT! Despite their frightening appearance, Xenobite Queens are very doting mothers. Many have been observed carefully tearing live victims into bite-size chunks small enough for their hungry offspring to swallow.[1]